Former US President Donald Trump’s then-chief of staff has reportedly turned over a PowerPoint presentation to the US House committee investigating the January 6 Capitol attack, detailing plans to declare a national emergency in order to retain the presidency.

The PowerPoint, which was sent in an email to Mark Meadows, was titled “Election Fraud, Foreign Interference & Options for 6 Jan,” and presented several possible courses of action for Trump to pursue in order to derail Congress’s certification of the election results on that day, The Guardian reported Saturday.

Meadows, who served as Trump’s chief of staff during his tumultuous final days in office, is seen as a key witness to the efforts to overturn the election by undemocratic means. He received the 38-page presentation in an email ahead of the certification process, a source familiar with the matter told the newspaper.

Having initially ignored a subpoena to testify before the House of Representatives committee, Meadows later reached an agreement on sharing information with lawmakers — before reversing course again. The PowerPoint presentation was handed to the committee as part of that agreement.

It recommended that in order for Trump to annul the November 2020 election result in which he lost to now-US President Joe Biden, he should first brief senators and members of Congress about foreign interference, then declare a national emergency and declare all electronic voting invalid. He could then, the presentation recommended, ask Congress to agree on a “constitutionally acceptable” remedy, the report said.

The PowerPoint also outlined options for then vice-US president Mike Pence to disrupt the election certification process, which he had the largely ceremonial role of overseeing, by appointing Trump electors in key Democratic states or rejecting the votes from those states. 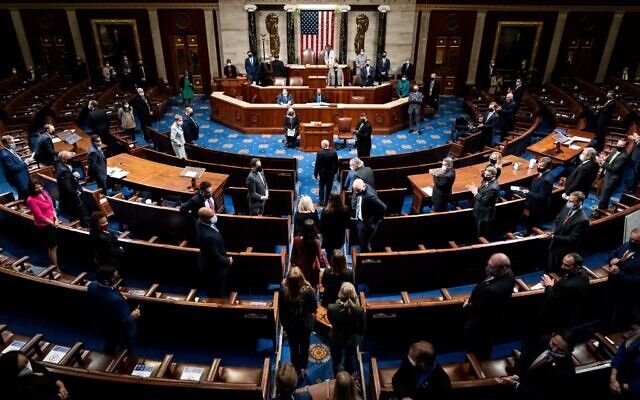 Electoral college votes are brought in before House Speaker Nancy Pelosi and Vice President Mike Pence resume presiding over a Joint session of Congress to certify the 2020 Electoral College results after supporters of President Donald Trump stormed the Capitol earlier in the day on Capitol Hill in Washington, DC on January 6, 2020. (Erin Schaff / POOL / AFP)

The PowerPoint was presented on January 4 to a number of Republican senators and representatives, the report said.

After handing over the presentation and a number of other materials linked to the January 6 attack, Meadows said last week he was no longer willing to cooperate with the probe, whereupon investigators threatened him with criminal prosecution.

“Now actions by the select committee have made such an appearance untenable,” Meadows’s attorney, George Terwilliger, said in a new letter to the committee circulated among US media.

The lawyer said Meadows’s change of mind had come after he learned over the weekend that the committee had “issued wide-ranging subpoenas for information from a third party communications provider.”

“We now have every indication from the information supplied to us last Friday — upon which Mr. Meadows could expect to be questioned — that the select committee has no intention of respecting boundaries concerning executive privilege,” wrote Terwilliger.

Trump has invoked “executive privilege” — a carve-out available in theory only to sitting presidents to protect sensitive private exchanges with aides — in a bid to avoid having to turn over documents requested by the committee. 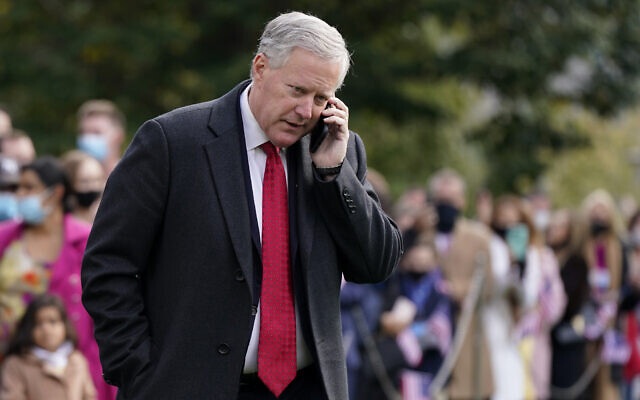 White House chief of staff Mark Meadows speaks on a phone on the South Lawn of the White House in Washington, on October 30, 2020. (AP Photo/Patrick Semansky)

The panel rejected Meadows’s executive privilege claim, noting that the hardline former Republican congressman had provided much detail about the attack, including his conversations with then-president Trump, in a new book.

In an interview aired late Tuesday on conservative broadcaster Fox News, Meadow said that “hopefully the courts can work it out,” adding that he had tried to be accommodating with non-privileged information “while making sure that executive privilege is protected.”

Panel chairman Bennie Thompson and his deputy Liz Cheney said in a statement they planned to go ahead with a deposition of the Trump loyalist scheduled for Wednesday.

“If indeed Mr. Meadows refuses to appear, the select committee will be left no choice but to advance contempt proceedings and recommend that the body in which Mr. Meadows once served refer him for criminal prosecution.”