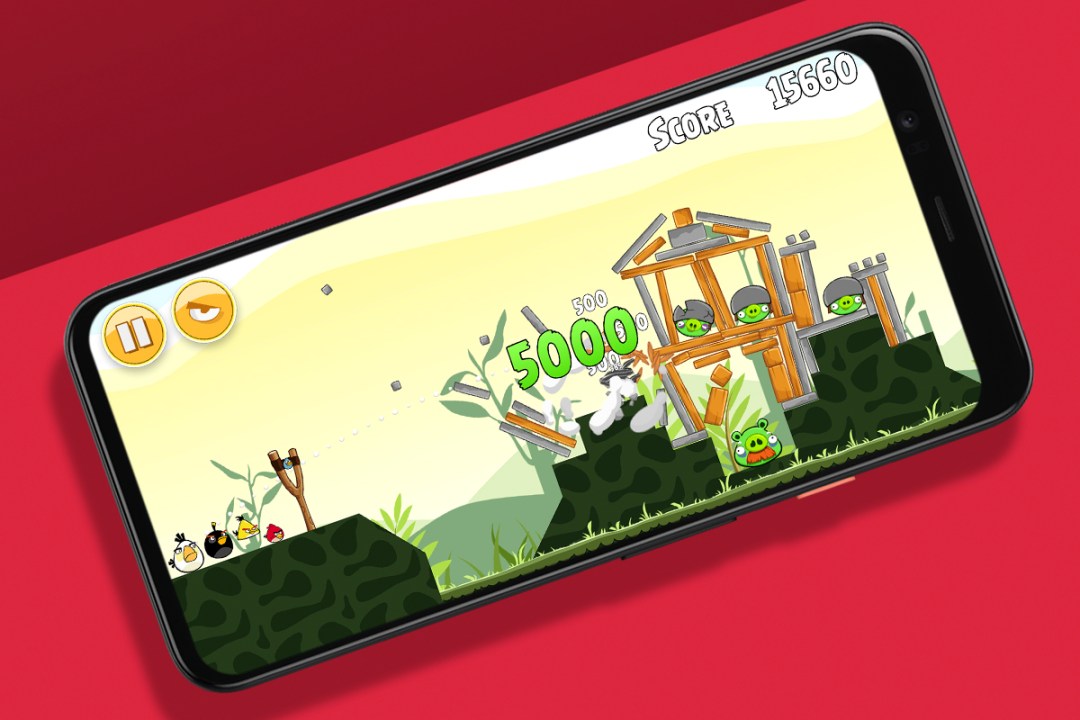 It might have escaped your notice, but Angry Birds was released for Android and iPhone last week. Don’t worry – you haven’t just slipped on a banana peel, tumbled into a time warp and been unceremoniously dumped back in 2009. This new/not-new title is a remake of the landmark mobile bird-twanger, which was pulled from app stores a few years ago.

According to Rovio, the game’s been rebuilt from the ground up. “We took great care to preserve the feeling of the original Angry Birds game,” said executive producer Sami Ronkainen, while firing canaries out of the window for ‘research purposes’. “We know our fans are a discerning bunch. Matching the gameplay, physics and appearance of the game next to the original was crucial,” he added while smashing up a pigsty and accusing the swine within of being nefarious egg thieves.

Whatever you might think of Angry Birds, there’s a good side to what Rovio has done. It resurrects a mobile title that was a game-changer, and the remake was designed to be as close to the original as possible. In an era where games are so ephemeral, purely on that level, it’s good to see it back.

The flip side is it feels like a dangerous reminder of where Rovio started and where it went – and how the purity of old-school mobile was more widely corrupted and transformed into a monster. This is hinted at right in-app store descriptions of Rovio Classics: Angry Birds, which state “no IAPs” (in-app purchases) and “no ads”. It’s easy to forget games on Android and iPhone used to be a straight value swap: money for entertainment.

Soon, though, games made you the product – selling you to advertisers – or they swapped value and entertainment for grind and ‘engagement’. Skeevy IAP became commonplace – and Rovio was no stranger to that. Even the original Angry Birds had the Mighty Eagle – a paid-for cheat mode to help players cruise through tougher levels. (Said extra is included in the remake.)

Things got far worse, though, to the point I recently found my kid crying about Angry Birds 2. Now, I don’t know how the game got on to the iPad she has access to – probably my fault. What I do know is I fumed at what I saw: a sad little bird with BIG EYES, and a warning that there were mere hours left to feed her.

We only needed another 25 apples, the game said – which I was told could be ours for 89p. Alert readers will recall that’s the same price as the remake. Although I did also spot another option, whereupon I could buy a clan chest designed to “help out your clan” – a snip at £89.99. In the end, my daughter, through tears, decided to delete the game herself.

Even Angry Birds Reloaded on Apple Arcade doesn’t provide a full escape route from this kind of horror show. Sure, there are no ads and IAP to navigate children past, but the game mechanics aren’t so different. Like too many recent Apple Arcade titles, Reloaded feels like a freemium game with IAP ripped out – a symptom of the service’s abrupt shift from premium and experimental fare to focusing on ‘retention’ and ‘engagement’ – albeit minus some of the more unsavoury elements.

I’m not sure what the moral of this tale is. That things were better in the old days? That you should maybe buy Rovio Classics: Angry Birds but not touch the IAP-infused sequel? That you should definitely support premium games on mobile that do exist – especially those by indies who still care?

One thing’s for sure: like those birds that get fired across the screen, hideous gaming practices are something the industry needs to catapult into oblivion. Sadly, there’s as much chance of that as me forking out 90 quid on virtual currency to feed cartoon birds.