Benq Mobiuz EX3210U Gaming Monitor Review: Beefs Up Your Gaming Setup, If You Can Afford It – News18

The BenQ Mobiuz EX3210U is priced at Rs 87,500 on Amazon currently. But is it worth the price? Find out in our review!

The BenQ Mobiuz EX3210U is one of the only 32-inch gaming monitor that offers up to 144Hz refresh rate and up to 4K resolution.

All gamers, be it PC gamers, console gamers, or mobile gamers, need a good screen to enjoy the experience. Now, while the high-end gaming monitors market is not as hot as it was a few years back, there are still brands that are making products, and very good ones at that. Benq is one company that has a range of high-end gaming monitors under its popular Mobiuz line. The company’s BenQ Mobiuz EX3210U gaming monitor is a 32-inch 4K gaming monitor with a 144Hz refresh rate and comes with a slew of features for gamers like HDR, AMD’s FreeSync Premium Pro technology, HDMI 2.1, and more. In terms of design, the BenQ Mobiuz EX3210U looks worth the money. Up front, it has a flat screen with minimal bezels. There is a speaker grille on the bottom of the front display, and the monitor looks quite sleek from the front profile. At the back, it has a white back panel and comes with a heavy duty single mount ergonomic stand that attaches to the back panel of the monitor. The stand also looks very fancy with its angular design and the orange and silver design. The back panel has a white colour finish and comes with four LED strips attached diagonally on the four corners. You can set the colour, pattern, and brightness for these lights. The BenQ Mobiuz EX3210U also has a speaker grille on the top of the back panel that says “Superior Sound by TreVolo” which adds to the whole gaming aesthetic that this monitor aims to match. In fact, the colour scheme will go perfectly with a PlayStation 5, given the black/white combination and LED lights. The BenQ Mobiuz EX3210U comes with ambient lights on the back panel that can be customised for pattern, colour, and brightness. (Image Credit: News18/ Darab Mansoor Ali)

The monitor and the stand were also very easy to install and use. There is also a detachable panel that hides all the ports for better cable management, and the stand can pop-out easily with the press of a button on the back panel. You can also adjust the height as well as the angle of the monitor both ways – to adjust to your viewing angle according to eye-level, or to turn it left or right. It is a very cool-looking monitor, and is very easy to assemble and start using. Good overall design.

The BenQ Mobiuz EX3210U has a 144Hz panel with a 4K UHD resolution. The monitor’s picture quality is good. The colours are proper and it runs on 4K resolution, even if connected to a laptop which does not have a 4K display. While gaming, the BenQ Mobiuz EX3210 offers a smooth and clear gaming experience. It enables 120FPS gaming at a 4K resolution, which just looks spectacular. The monitor works perfectly with a PlayStation 5 and games like Call Of Duty: Warzone, Uncharted, and Rocket League run at 120FPS. However, since not a lot of PS5 games support 4K resolution at 120FPS, I was not able to try that with the PlayStation 5. The BenQ Mobiuz EX3210 comes with an ergonomic stand that is easy to install and allows the monitor to move in multiple directions. (Image Credit: News18/ Darab Mansoor Ali)

The monitor also comes with HDR and several picture modes like cinema, gaming, FPS mode. Users can also set their own Dynamic mode with their own level of frame rate, HDR on/off, brightness, and more. Further, there are separate gaming modes that include “Racing Game,” “FPS,” and “RPG.” There are also a bunch of other customisations as well like adjusting the blue light, brightness, and more. There is also a “reading mode” that turns the screen black an white so you can easily read books and documents on a bigger screen. I also used the BenQ Mobiuz EX3210U to edit a few photos and a couple of videos and for those purposes also the BenQ Mobiuz EX3210U is a very good monitor. One thing I was not able to figure out was the option of changing the monitor’s resolution, which wasn’t customisable when on a gaming console. While the monitor obviously performs well on almost all aspects, there are some things that could have been better. For example, the brightness levels aren’t as high as I was expecting from a Rs 87,500 monitor. Apart from that, the sound is not as good as BenQ has marketed it to be and you will require to put on a set of headphones or attach a speaker to your console or PC for proper audio. 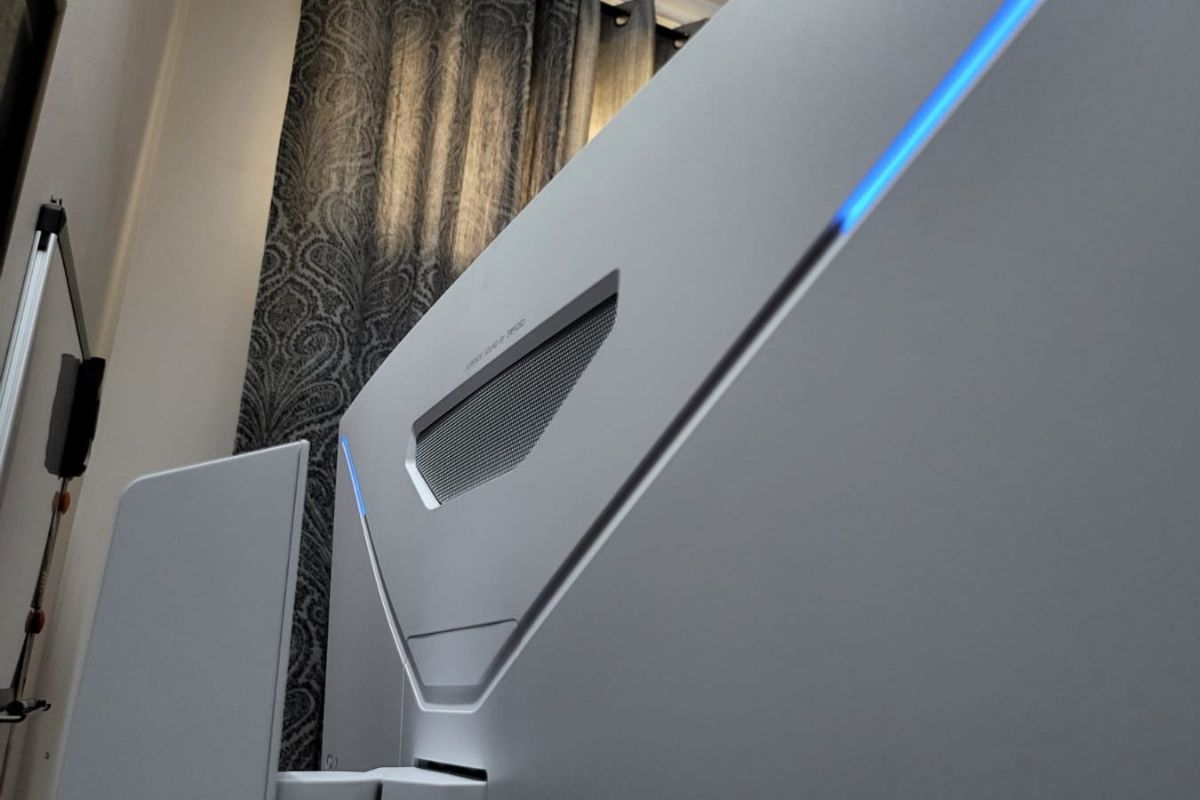 There is a speaker grille as well on the back panel of the BenQ Mobiuz EX3210U. (Image Credit: News18/ Darab Mansoor Ali)

The BenQ Mobiuz EX3210U is one of the highest-specced gaming monitors on the market right now. The monitor will obviously amp-up your gaming setup with both in terms of aesthetics and immersiveness. It has a very neat design and great build quality, and the picture quality is beautiful. The BenQ Mobiuz EX3210U does justify its value the moment you set eyes on the monitor, and it is one of the very few 32-inch monitors in the market that offer 120Hz refresh rate at a 4K resolution. Not just gaming, the BenQ Mobiuz EX3210U is also pretty good for video and photo editing. The speakers aren’t as loud as you’d expect, and it is not the brightest gaming monitor out there, but those are things that won’t bother much gamers as gaming setups usually have headphones or speakers and are in a closed room. The gaming monitor does enable 120FPS gaming, but so do other, cheaper options. BenQ Mobiuz EX3210U justifies its value with the quality it offers, but there won’t be many takers in the Indian market. (Image Credit: News18/ Darab Mansoor Ali)

While it is a clear “buy it if you can afford it” verdict, gamers usually prefer high refresh rate displays that don’t cost a bomb. Since most console games still don’t support 4K gaming at 120FPS, it is not a practical option for console gamers. For PC gamers, there are other monitors that come with a slightly lower resolution and lesser features but offer higher refresh rates and cost much less than Rs 87,500.