2022 Olympic Medal Count: Who Won The Most Medals, And How The U.S. Fared In Beijing – NBC Chicago

The 2022 Winter Olympics have ended in Beijing, and one country enjoyed a clear advantage in the final medal count.

Medal history has been made in more ways than one during the Winter Games.

Norway broke the record for most gold medals at a single Olympic Winter Games and, most recently, Elana Meyers Taylor earned her fifth Olympic medal, making her the most decorated African American Winter Olympian.

At the 2022 Games there were 109 gold medals in total, up from 102 in Pyeongchang four years ago and a far cry from the 16 on offer at the first Winter Olympics at Chamonix in 1924.

The United States came to Beijing with the second-most Winter Olympics medals with 305.

Over 300 medals were awarded to Olympians participating in the 2022 Winter Games. With 15 sports and 109 events, ranging from skiing to bobsledding to figure skating, world-class athletes will go for gold during a two-week global competition on the grandest stage.

Here are the top nations in the final medal count:

Norway not only broke the record for most gold medals in a single Olympics with 16, but also defeated the Russian Olympic Committee in the total medal count with 37.

The Russian Olympic Committee had the second-most medals with 32, winning the silver medal in men’s hockey to finish up the Olympics.

How did Team USA Do?

The United States ultimately won eight gold medals, with those prizes going to:

The U.S. had to endure five days of grueling competition – with some disappointing upsets – to finally bring home its first gold medal in the Olympics.

Lindsey Jacobellis slid to victory in the women’s snowboard cross, putting an end to Team USA’s gold-less streak at the Winter Olympics in Beijing.

Snowboarder Julia Marino won the United States’ first medal on Saturday, but it was not gold. Madison Chock and Evan Bates added another silver medal to the team’s count after their stunning galactic-themed ice dance Sunday night.

Jaelin Kauf won the Olympic silver behind Australia’s Jakara Anthony during the women’s moguls finals, and Ryan Cochran-Siegle clinched another silver medal, adding to the USA’s total count, in men’s super-G, on Tuesday.

Nathan Chen earned gold in the men’s singles figure skating competition at the 2022 Winter Games. He clinched the title by receiving a 332.60 total score, giving him a 22.55-point victory over silver-winning Yuma Kagiyama of Japan.

Chloe Kim wasted no time showing off why she is the reigning gold medalist as she blew the competition away with her first run of the final halfpipe event – securing her spot at the top of the podium and women’s halfpipe history.

The United States won the first-ever Olympic gold medal in the mixed teams aerial event at the Winter Olympics.

The trio of Ashley Caldwell, Chris Lillis and Justin Schoenefeld scored a total of 338.34, beating out China for the gold. It’s the first gold medal in aerial freestyle skiing for the U.S. since 1998.

Mixed team snowboard cross made its Olympic debut at the 2022 Beijing Games and Team USA also won the first-ever gold medal in the event.

Erin Jackson ended a medal-less day for the U.S. on Sunday with her win in the 500-meter final.

Alpine Skier Ryan Cochran-Siegle took home a silver medal in the Super-G on Monday, 50 years after his mom Barbara Cochran won gold at the 1972 Winter Olympics.

Team USA then had a 1-2 punch atop the men’s freeski slopestyle podium. Hall earned gold and Geopper earned silver.

The men’s freestyle skiing halfpipe podium at the 2022 Beijing Olympics featured not one but two U.S. skiers.

Elana Meyers Taylor made history on Saturday, becoming the most decorated African American Winter Olympian with five medals when she won bronze in the two-woman bobsled with a combined time of 4:05.48 alongside Sylvia Hoffman. 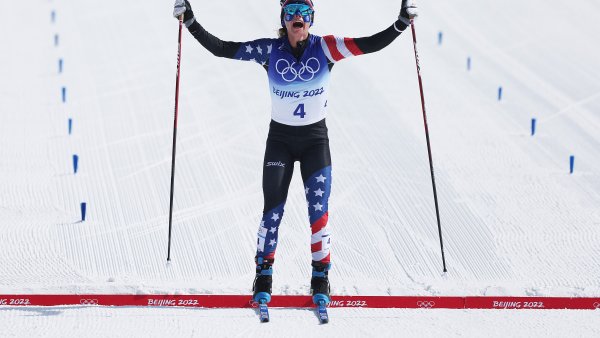 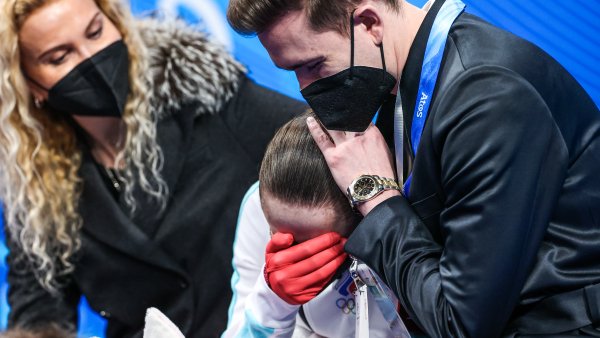